Last week Daniel was busy in the lab, doing a first experiment for the LilBUBome. And as we briefly posted yesterday: he found something really cool! We actually just wanted to test whether the DNA we extracted from BUB’s blood was of good quality. So we decided to do this by checking the DNA sequence of BUB’s ZRS.

Well, it turns out that with this experiment, we found out why BUB has polydactyly AND discovered at the same time that she’s (very, very, very distantly) related to Ernest Hemingway’s cats!

Here’s the full story. It’s a bit long, but worth the read…

Ernest Hemingway, the Nobel-prize winning author, was a cat person.

He said he admired the independent spirit of these animals. Back in 1935, Hemingway was given a polydactylous cat by a sailor. This cat, named Snowball, became an important member of the Hemingway family – she was even been documented in their family pictures. Snowball gave birth to multiple polydactyl kittens, some of which also stayed on the estate, and continued breeding. When Hemingway died, this colony of Snowball’s descendants stayed. Visitors to Hemingway’s estate in Key West can still go and see these cats:

Over time, this colony of so-called Hemingway’s cats became famous. Scientists took notice of these special polydactyl felines and a few years ago researchers from Edinburgh looked to find the genetic cause of their polydactyly. Like us, they thought that the ZRS – a special region that is often associated with polydactyly – was a pretty good place to look. They found that cats from the Hemingway estate with polydactyly all shared a single change in the ZRS. 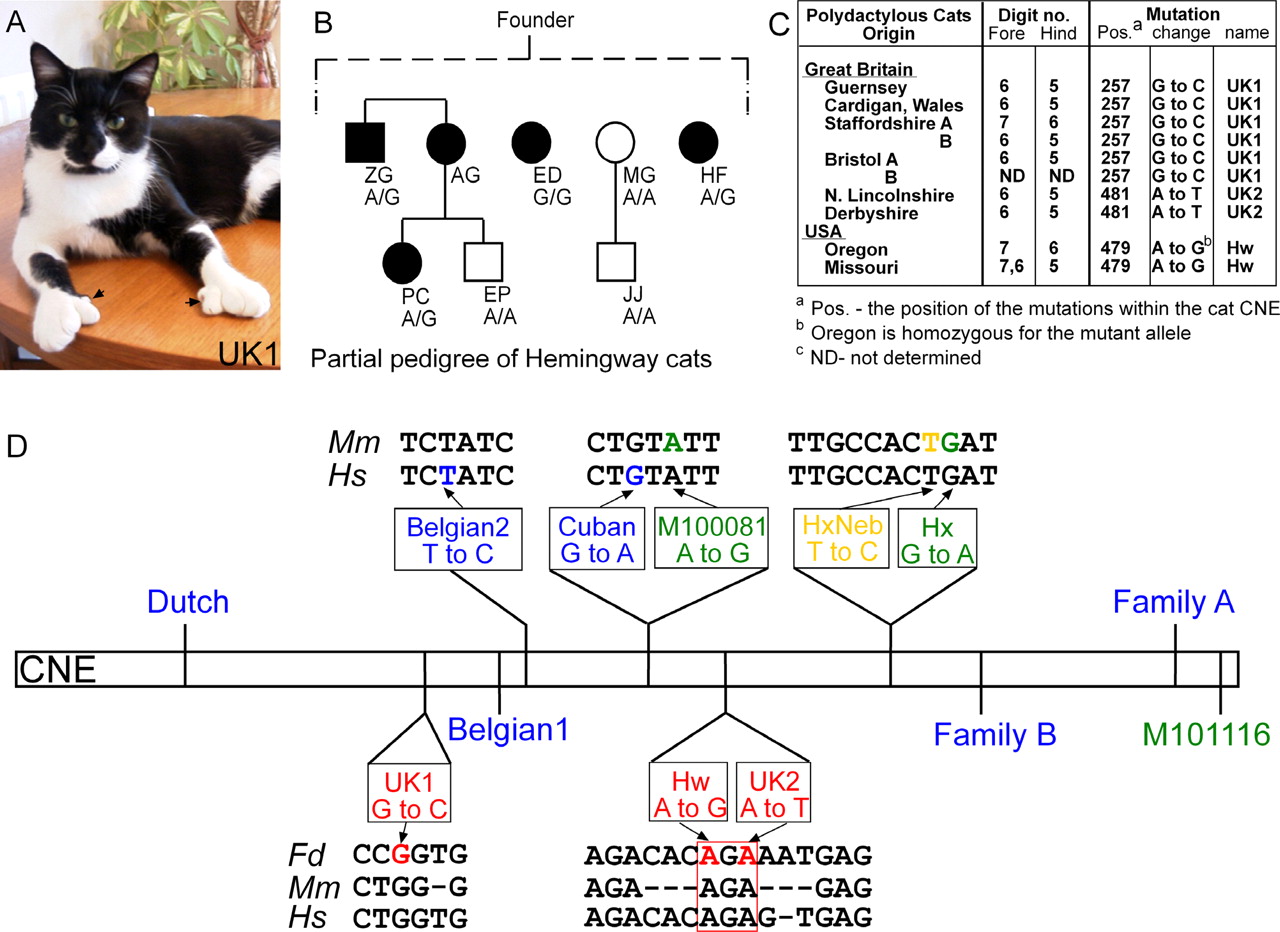 The great thing is, that these results have been published and meticulously described, so we know exactly what the change is that the scientists found in the Hemingway cats. And when we looked at the ZRS sequence of LilBUB, this is what we found.

Sanger sequencing result of LilBUB’s ZRS. She has two copies of the ZRS, one carries the normal version (above), the other one the Hemingway mutation (below)

This means that LilBUB has inherited a ZRS from one of her parents with a “normal” ZRS (upper panel), but from her other parent she got a ZRS with the same mutation as the one described in the cats on Hemingway’s estate (lower panel, the positon is highlighted with an arrow). Therefore, we can conclude two things:
– first, it is probably this mutation causes the polydactyly in BUB
– second, it’s likely that BUB and Hemingway’s cats are distantly related. We think this is a big deal. After all, BUB’s an orphan, and with the power of genetics we might have given her some family! :)*

We are amazed. LilBUB has brought her magic to science!

* In case you noticed: we’ve been using a lot of “probably”, “likely”, “might”. It’s because we’re scientists. The data we’ve shown you is definitely true, and in line with previous scientific articles. However, we can’t be 100% sure about the distant relatedness of BUB with Hemingway’s cats, unless we did a whole bunch of other experiments. Hence the uncertainty of our formulations.

4 thoughts on “Congratulations! It’s a Hemingway.”