Today we’re back with a new episode of the videolog, where I’ll explain what BUB’s DNA sequence looked like fresh off the sequencing machine. A couple of things to note: as our videos will get more and more technical please feel free to leave comments or to contact us if there’s anything you’d like us to clarify. Also, since we can’t include all the technical details, we’ll start leaving links to tools and papers together with the video, so you can follow up on stuff if you’re interested. Hope you enjoy!

More info about:
– the fastq format on wikipedia
– a technical note by Illumina about understanding quality scores
– a table for converting the characters in fastq files into an actual quality score

Happy New Year! We hope everyone has had a great start to 2016!

We know things have been a bit quiet around the LilBUBome, but the second half of last year was a busy time for us: Daniel, Dario and the sequencing team at the Max Planck Institute completed the sequencing of BUB’s DNA (we blogged about it here and here), and we’ve since been analyzing the data and following up on candidate mutations. We also did a bit of outreach, talking at various venues about sequencing BUB’s genome with the help of crowdfunding – and what an amazing experience has been to work with such a special cat and so many supporters!

In October we talked about the LilBUBome at the Sanger Institute postdoc retreat. While we were there we were allowed to have a quick look at their sequencing facility – and of course we took a picture for you!.

In addition, we’ve compiled a series of videos, which we’ll be releasing over the following weeks, where we try to explain what we did, why and how we did it and how you can go about sequencing a genome.

Today, let us introduce the first installment of the LilBUBome videolog. We hope you enjoy!

…and the technical parameters of our sequencing run.

Last week we gave you a brief and general overview of the different technologies that are available if you want to sequence a genome. So, how did we end up selecting Illumina sequencing? Since we’re frequently asked about our choice of technology, this post is dedicated to this topic. We’ll also discuss some of the technical details of our sequencing run, so if you’re interested in these kinds of things, keep reading.

Questions about the LilBUBome sequencing technology during our Reddit AMA.

Basically, our choice was an absolutely pragmatic one: We wanted to maximize our chances of finding something. Now, in terms of sequencing probably any of the available technologies would have given us data, but choosing the right one can make a difference when it comes to analyze certain parts of the genome. We decided to work with a method that was well-established in the institute where Daniel and Darío work. Their institute has an excellent sequencing facility, which routinely does Illumina sequencing and lots of complicated analysis, and so we have relied on their help and expertise throughout the hands-on part of the LilBUBome. Hence, why we chose Illumina.

As an added bonus there have been some unexpected benefits:

* And finally, here – as promised – the Technical details (aka TechTalk):
Sample preparation kit: Truseq sample prep for Next Seq Version2. Version 2 gives slightly longer reads and the coverage is much more even than with Version 1.
DNA fragmentation: We used a Covaris machine, according to the standard protocol provided by Illumina. We made 2 libraries (300bp and 500bp length) and then ligated adaptors. After adaptor ligation (Adaptors were roughly 120bp each), the libraries were run on a gel and the bands (sized 400-500bp for the 300bp library and 600-700bp for the 500bp library) were excised from the gel.
Seq machine: NextSeq 500. (Before the Illumina donation we would have used the HiSeq 2500. The NextSeq gave longer reads, and also the sequencing protocol was much faster (20 hours on the NextSeq vs 10-11 days of the Hiseq))
Read lenght : 2x 150bp. (If we would have used the HiSeq, we would have sequenced 2x 125bp reads. The longer reads from the NextSeq don’t improve coverage (40X), but they do allow for better assembly. Better assembly is crucial to detect small rearrangements.)
Paired end: Yes

Despite the long silence, Daniel, Dario and I have been busy working on the LilBUBome, and we’ll be releasing more info in the next few weeks. As we reported last time, we had extracted high quality DNA from BUB’s blood sample. Now, we proceeded to the sequencing step!

Meanwhile, we’ve also been exploring new forms of communicating results with you, because we figured that reading long, technical blog posts might be pretty tedious. Here our first attempt at a LilBUBome video. Let us know what you think!!

Last week Daniel was busy in the lab, doing a first experiment for the LilBUBome. And as we briefly posted yesterday: he found something really cool! We actually just wanted to test whether the DNA we extracted from BUB’s blood was of good quality. So we decided to do this by checking the DNA sequence of BUB’s ZRS.

Well, it turns out that with this experiment, we found out why BUB has polydactyly AND discovered at the same time that she’s (very, very, very distantly) related to Ernest Hemingway’s cats!

Here’s the full story. It’s a bit long, but worth the read… END_OF_DOCUMENT_TOKEN_TO_BE_REPLACED

You might have already seen it in the video or in our last lab note: We recently received a blood sample from LilBUB. The blood was taken from her during her routine medical check-up with her vet, Dr. Woodruff. 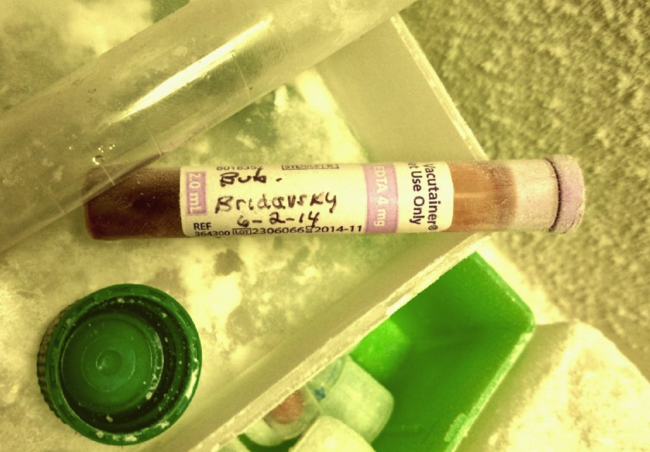 And now that the sample has arrived in our lab, we can start the actual work! For this, what we need to do first, is to extract the DNA from the blood sample. Might sounds sophisticated, but actually: not at all!!!!